Written by Claire
Updated over a week ago

What Facebook own posts can you track in quintly?

quintly now imports the photos added to an existing album.

The "added photos to album" posts are available via Facebook's API, both publicly and privately and you can view them on quintly. However, if we were to include their Interactions/Engagements data in our metrics it would influence the Interaction Rate in a very drastic way and would be very misleading. For this reason, we decided to exclude the interactions/engagements data for these posts. Therefore, although you'll be able to see these "added photos" on the tool, their interactions data will say n/a.

Let’s take the following case we had in the past:

2. BMW adds new photos to this album e.g. 1 day ago, then this story would show up on the timeline with 10k reactions. To a Facebook user, it seems this single post received a high amount of reactions, when in fact these reactions are bound to the overall album. Thus our Interaction Rates and engagement numbers over time would show completely wrong and very high numbers. 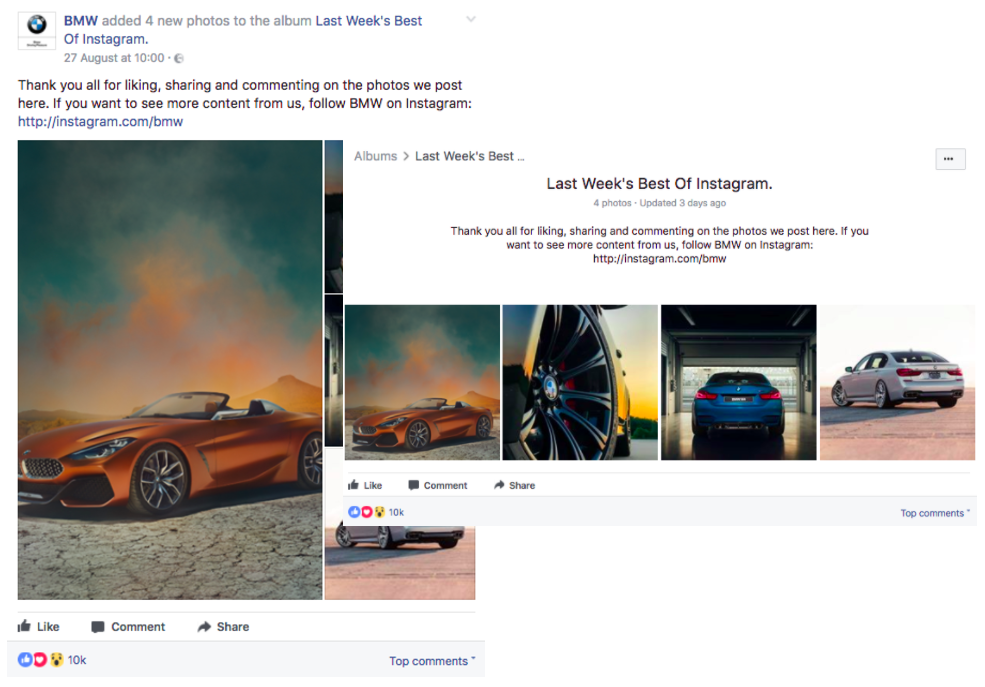 As you can see above the post and album shows exactly the same number: 10k reactions.

Will I be able to analyze interactions/engagements data for albums in quintly?

At the moment we don’t show this data on albums in quintly nor in Facebook Business Manager because of the misleading figures. However, you would be able to see the post itself on the tool. If this changes in the near future we will be sure to notify our users here https://www.quintly.com/updates/.

Did this answer your question?